How RSRT is driving the search for a Rett cure

Scientific discoveries are typically made in academic labs, but drugs are developed in biopharmaceutical companies. Therefore transitioning discoveries from academia to industry, where discoveries can be transformed into drugs, is critical. For some diseases these transitions happen naturally. Rett, however, is not low hanging fruit for companies because there are many diseases that are easier for them to tackle. So companies must be incentivized to pursue Rett. How does this happen?

First, anyone that knows RSRT knows that we are focused on genetic solutions to Rett. We believe the greatest improvement for our children will come from addressing the root cause of the disease: alterations in MECP2. We have invested many millions of dollars — more than any other Rett nonprofit by far — in six strategic curative approaches and generated crucial discoveries that have enticed companies to pursue Rett syndrome.

But that’s not all. We have also systematically put in place initiatives that have generated important resources that biopharmaceutical companies look for when deciding to enter a new disease indication. These initiatives include:

By aggressively investing in six genetic solutions to Rett and simultaneously putting in place the necessary initiatives, RSRT has laid a strong foundation for companies to add Rett syndrome to their disease pipeline.

Today there are seven such companies, all of which are pursuing a cure for Rett because of discoveries and initiatives that were generated with RSRT funding — and there are more companies on the way.

The graphic below details the tangible contributions of RSRT for each of the seven companies.

If you’ve contributed to RSRT you have played a key role in getting us here. Thank you! Now, let’s go all the way. 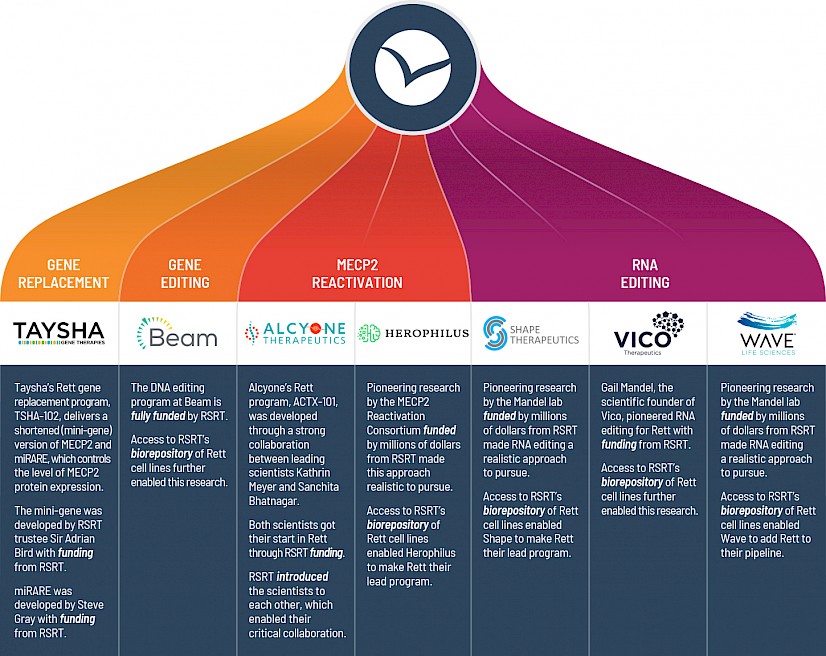