Rett Syndrome – A Disease of Neurons AND Glia

A paper published online today in Nature reveals that glia play a key role in preventing the progression of the most prominent Rett Syndrome symptoms displayed by mouse models of the disease: lethality, irregular breathing and apneas, hypoactivity and decreased dendritic complexity. The discovery, funded in part by the Rett Syndrome Research Trust (RSRT) was led by Gail Mandel, Ph.D., an investigator of the Howard Hughes Medical Institute at Oregon Health and Science University.

Brain cells can be divided into two broad categories: neurons and glia. The three types of glial cells are the star-shaped astrocytes, the oligodendrocytes, and microglia. Historically, neurons have received most of the attention, while glia were thought to play a secondary supporting role. During the past several years it has become increasingly clear that glial cells contribute in very complex and dynamic ways to healthy brain function and are important players in Rett Syndrome.

Monica Coenraads speaks with Gail Mandel, PhD and Dan Lioy, a graduate student in her lab, to discuss their data published online today in Nature, concerning 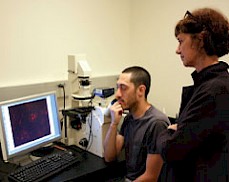 the influence of glial cells on the progression of Rett Syndrome symptoms.

MC: It’s good to speak with you both again, and congratulations on the new Nature publication.

MC: Let’s go back in time a little bit to give this work some context for our readers. Soon after the discovery that mutations in MECP2 cause Rett Syndrome, a researcher with a longstanding interest in chromatin, Alan Wolffe, organized a scientific meeting in Washington DC. I had just co-founded the Rett Syndrome Research Foundation, which provided financial support for this meeting. It was the first scientific meeting I attended and it stands out very prominently in my mind. And it was there, over a decade ago, that I first met you. After the meeting we stayed in touch, and I remember trying to get you involved in Rett. At first you were somewhat resistant, but eventually you really jumped in with both feet. What triggered that shift?

GM: My lab was, and is still today, working on a gene called REST, which is a repressor. We had been doing biochemical experiments and we noticed that MECP2 was one of the proteins that were in the vicinity of the REST binding sites. We didn’t know much about MECP2 so we started reading about it.

This was in 2002. Nurit Ballas was in my lab at the time, and she and I became interested in where MECP2 was in the nervous system. And we were perplexed, because it was supposed to be a ubiquitous protein, but people were thinking it wasn’t in glial cells. Basically, Nurit and I were skeptical, because we know a lot about repressors, and ubiquitous repressors in particular, and from a molecular biology standpoint, it just didn’t make a lot of sense to us that MECP2 would be excluded from glia.

So Nurit did her own experiments to search for MECP2, and she found it in purified glia, and using immunocytochemistry she showed it was in tissue—in glia in tissue. And that made us consider the possibility that MECP2 could be regulating something in glia.

MC: And that finding is a perfect example of why it’s always good in a field to reach out to new people who will bring their own experience, curiosity and fresh ways of looking at a problem. You published your first paper on the subject in early 2009 in Nature Neuroscience. Dan, please give our readers the highlights of the new paper that just came out in Nature.

DL: The key point of the paper is that in a mouse model that has no MECP2, putting MECP2 back just in astrocytes goes a long way toward correcting the Rett phenotype, especially the respiration problems. We also document that knocking out MECP2 only in astrocytes causes a phenotype, including a respiratory phenotype. But interestingly, and I’ll be the first to admit that I’m not yet clear on why this is—the phenotype isn’t complimentary to the extent of the rescue. In a simple world one would do an experiment and find that if putting MECP2 back in one cell type corrects the phenotype then removing it from that cell type should, logically cause the phenotype with equal severity. And so far, that doesn’t seem to be the case.

What I take away from our experiments is that neither MECP2-deficient neurons nor glia alone are sufficient to cause the full-blown Rett phenotype. But conversely, putting MECP2 back in just neurons or glia can go an extremely long way in correcting the phenotype. A scientifically interesting question is: Why is that?

GM: That was really the unexpected part.

DL: One possibility that we’ve discussed at length is that both cell types, neurons and glia, must be mutated to get the full phenotype. There is precedence from other diseases, like ALS, that says that neurons and glia contribute to the pathogenesis of the disease, but they do so differently. And we wonder whether or not this may actually be a general model that’s also applicable to Rett.

MC: Was this finding surprising?

GM: Yes, it was. Thankfully we did both experiments pretty much at the same time, knocking it out and putting it back. Otherwise I’m not sure we would have pursued putting it back based on the knockout. Since the knockout was not as dramatic as the null we might have concluded that glia are not very important and the disease is mostly neuronal. But, luckily, we did them both at the same time.

MC: Another example of the serendipitous nature of science. Regarding the hypothesis that neurons initiate and astrocytes play a role in the progression of the disease, do you think that’s going to become more of a common theme across diseases?

GM: That model was presented initially by Don Cleveland for ALS. I do think it is going to become a more common theme. I think it also means that we need to understand more about how neurons and glia talk to each other.

MC: Historically glia have not attracted the type of attention that neurons have, but that is changing. Gone are the days where glia were thought of simply as structural components and nursemaids to the neurons.

MC: RSRT is funding a collaborative gene therapy project between your lab and Brian Kaspar. You are using a vector called AAV9, which, depending on when you administer it, seems to target astrocytes. If indeed replacing MECP2 in astrocytes is beneficial then this vector might be quite interesting.

GM: So this project is a big risk for my lab to take on in terms of manpower because I don’t know if it’s going to work. But I think the project is so interesting and clinically relevant. In terms of targeting the underlying genetic problem in Rett, either we turn the silent MECP2 on from the inactive X, or we have to think about how to add the gene back. That’s why I think AAV9 may hold promise, because it has good expression and it crosses the blood-brain barrier. There are a lot of labs working on gene therapy approaches so the field is competitive, but I think that is a good thing.

MC: Well, we are risk-takers---we can’t afford not to be---so we’re delighted that your lab has become so engaged with Rett and opened up new research vistas. I agree with you about the value of competition, and will follow the unfolding of the next developments in your work with great interest. There is certainly no lack of complexities to explore. We hope the Rett community will continue to benefit from your scientific curiosity and perseverance. Thanks for your time with us today, and we look forward to the next updates.