Adrian Bird and colleagues recently published their latest paper on MeCP2 in the journal Human Molecular Genetics.
The series of experiments described in the paper were designed to explore what happens when the MeCP2 protein is removed from mice of various ages, including in a fully adult mouse. This work was funded in part by RSRT with generous support from RSRT UK, Rett Syndrome Research & Treatment Foundation (Israel) and other organizations who financially support our research effort.

Below are excerpts from a conversation with joint first authors Hélène Cheval and Jacky Guy.

MC Dr. Cheval, you trained as a neuroscientist. What attracted you to the Bird lab, which is very biochemistry-based, and where you are the sole neuroscientist?

HC My previous lab, run by Serge Laroche, was a pure neuroscience lab focused on learning and memory. However, I was actually doing biochemistry and I was very much interested in how to get from molecule to behavior, and I was also quite interested in chromatin. I had read the Bird lab reversal paper of 2007 and thought it was one of the most exciting papers I had ever seen. Upon receiving my PhD I applied for a post-doc position, convinced that it would be a great experience for me but also thinking that perhaps the lab would benefit from having someone with a neuroscience background. I joined the lab in 2009.

MC Dr. Guy, you co-authored your first paper on Rett Syndrome in 2001. That was the paper that described the MeCP2 knockout mouse model made in the lab, one that is now used in hundreds of labs around the world.

JG I joined the lab in 1997. My first project was to make the conditional mouse models of Mecp2, meaning mice where the protein can be removed at will. At that stage we didn’t yet know about the link between MECP2 and Rett Syndrome. That came about as I was working on the project. It was a very exciting time.

MC It’s unusual for people to stay in a lab so long. This gives you an amazing depth of uninterrupted knowledge about the field.

JG I took a rather unconventional path. I’m very happy to do bench work and being able to work in the same field has been wonderful.

MC Dr. Guy, perhaps you can start us off. What are the key questions you were trying to answer with this series of experiments?

JG This was actually an experiment we had been wanting to do for a long time. We have always been interested in defining when MeCP2 is important. Rett had been thought of as a neurodevelopmental disease. Since we were completely new to Rett, we thought maybe it’s not neurodevelopmental. So we set out to remove the protein at different ages and see what happens. Removing the protein is not quite as simple as reactivating the gene, which we had already done in the reversal experiment. When you reactivate the gene it makes protein right away. In this experiment, however, when you deactivate the gene you have to wait for the protein to decay away. We found it takes about two weeks for the amount of MeCP2 protein to fall by half.

HC Jacky’s reversal experiment suggested that MeCP2 is implicated in adulthood. But many papers were still describing Rett as a neurodevelopmental disease. We also wanted to confirm a hypothesis that we all shared in the lab that MeCP2 is required throughout life.

MC That is a hypothesis that was also put forth in Huda Zoghbi’s 2011 Science paper. She showed that removing Mecp2 in adult mice aged 9 weeks and older caused Rett symptoms. Do you think that her paper and your new data have definitively put to rest the notion that Rett is neurodevelopmental?

HC To my mind it’s clear that it’s not merely neurodevelopmental.

JG I think “merely” is the key word here. The phenotypes we analyze in mice are those that are quite easy to see; for example, lifespan, breathing, gait. There might be more subtle things that we are not observing, or that are not affected by knocking out the protein in adulthood. And we are not analyzing cognitive aspects. So we can’t completely rule out the possibility that there could be some things that are indeed of a neurodevelopmental origin that we are not seeing in these experiments. 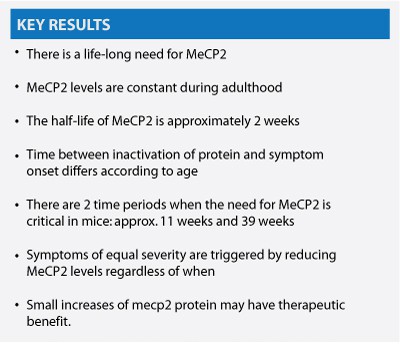 JG Mecp2 can be deleted by treating the mouse with tamoxifen in the same way the protein was reactivated in the reversal paper. In this paper we picked three different time points to turn off the gene: three weeks (which is when mice are weaned and begin to live independently) eleven weeks and twenty weeks. In all three scenarios the tamoxifen was able to delete Mecp2 in about 80% of the cells.

What you might expect is that at whatever age you delete the gene, there will be a certain amount of time for the protein to disappear and then the effects of not having the protein will appear.

In fact, what we found is that the time it took for symptoms to appear varied with the age at which we inactivated the gene. It took longer for the symptoms to appear when we deactivated Mecp2 at 3 weeks. When we removed MeCP2 in older mice, the symptoms appeared more rapidly. So it seems that younger mice are able to live symptom-free without MeCP2 for a longer period of time. There is a certain period when the need for MeCP2 becomes more important in mice. This is the first critical time period that we talk about in the paper; it happens around eleven weeks.

As we followed the mice treated at all three time periods, eventually they all started to die at about the same age, approximately thirty-nine weeks, regardless of when MeCP2 was removed. We concluded that this time period centered around thirty-nine weeks represented a second critical period for MeCP2 requirement. This is a time in a mouse that roughly coincides with middle age in humans. We think that maybe MeCP2 is playing a role in maintaining the brain as it ages.

Interestingly, this time frame of thirty-nine weeks is when female mice that are MeCP2-deficient in about 50% of their cells from conception begin to show symptoms. The male mice which have zero MeCP2 can’t make it past the first critical time period of eleven weeks. When you delete MeCP2 in 80% of the cells, the male mice show symptoms at 11 weeks and die at 39 weeks. So having about 20% normally expressing cells allows you to survive the first critical period but not the second.

MC I’ve heard clinicians say that women with Rett in their 30s and 40s and beyond look older than they are. I wonder if this has anything to do with your hypothesis that MeCP2 may play a role in aging. Of course we don’t know if the premature aging is primary or secondary. It may have to do with the effects of dealing with a chronic illness for many years.

JC We are quite interested to learn about a potential late deterioration in women with Rett but there is very little published on the subject.

MC There are two potentially critically relevant points made in your paper. One is the fact that the half-life of the MeCP2 protein is two weeks. That could be relevant and encouraging for a protein replacement approach.

JG We certainly had this in mind when we were doing the experiment. The half-life of MeCP2 is longer than we expected. And could in fact bode well for protein replacement therapy. One caveat, ours was a bulk brain experiment. It could very well be that if you looked regionally in the brain or by cell type you might find varying results.

MC The other potentially clinically relevant information comes from comparing the severity of symptoms seen in the mice in this study versus the adult knockout done in the Zoghbi lab and correlating symptoms to amount of MeCP2 protein. Your experiments yielded 3% more protein and resulted in less severely affected animals. Can you elaborate?

HC That such a small difference in protein could have such a significant impact on survival is unexpected and indeed may be relevant for therapeutic interventions. We may not need to get the protein back to wildtype levels to have an effect. It may be possible that even small increases may be helpful.

MC Congratulations to you both on this publication. The Bird lab has made numerous seminal contributions to the Rett field. The Rett parent community doesn’t typically have a chance to glimpse the researchers behind the experiments, doing the day-to-day work, so I’m delighted to provide an opportunity for our readers to get to know you a bit. I look forward to the next publication. Best wishes for your ongoing work.