The Rett Syndrome Research Trust supports and funds Rett syndrome research for a cure. We believe a cure for Rett syndrome is possible because of three critical scientific facts:

The root cause is known — alterations in a single gene, MECP2

The disorder is not neurodegenerative — brain cells don’t die

We’ve taken the optimism and hope that stems from these three facts and built a comprehensive plan for curing Rett syndrome: CURE 360. This plan, the only one in existence for Rett, encompasses our vision, singular focus, deep understanding of the science, the environment we’ve built for collaboration, and our experience with drug and business development. The plan is executed by our staff and advisors who are driven and fearless, and who refuse to be distracted by anything that doesn’t move the needle toward a cure.

The Business of Drug Development

The spark for a new drug typically happens with a basic science discovery in an academic laboratory. A drug candidate is tested in cell cultures and then in animal models. With encouraging data in hand, intellectual property (IP) is filed. Scientists sometimes start a company that licenses the IP from the academic institution. More often, however, the institution markets the IP to biopharmaceutical companies.. Once the IP is licensed, the biopharmaceutical company begins work on a disease indication.

The divide between academia and biopharmaceutical companies is often referred to as the “Valley of Death” because most discoveries never make the transition. RSRT’s CURE 360 eliminates the “Valley of Death” by bridging the divide between academia and biopharma through our scientific and business connections, and drug development experience. Our track record speaks for itself: Every single company pursuing a cure for Rett is able to do so because they leveraged discoveries and resources that were advanced with RSRT funding.

Learn how RSRT is accelerating
the attack on Rett syndrome
with Cure 360.

Because of RSRT's efforts there is an extensive pipeline of MECP2 targeted programs in development at biopharmaceutical companies and in academia. Every single company pursuing a cure for Rett is able to do so because they leveraged discoveries and resources that were incubated with RSRT funding.

This pipeline, which shows current and projected 2024 goals, is dynamic. As new data emerges the pipeline will be updated.

There is a lot going on now in the world of Rett research, and the best of it is supported by RSRT. RSRT’s Role As A Strategic Partner to Biopharmaceutical Companies

Breakthrough discoveries are made in academic labs. But academic scientists are not drug developers — biopharmaceutical companies develop drugs. As Rett syndrome is not low-hanging fruit for biopharma, RSRT functions as a strategic partner to ensure that biopharma picks up programs that we have advanced. The basic science, translational efforts, tools, and resources we have nurtured and supported have facilitated the biopharmaceutical companies below to initiate MECP2 therapeutic programs. 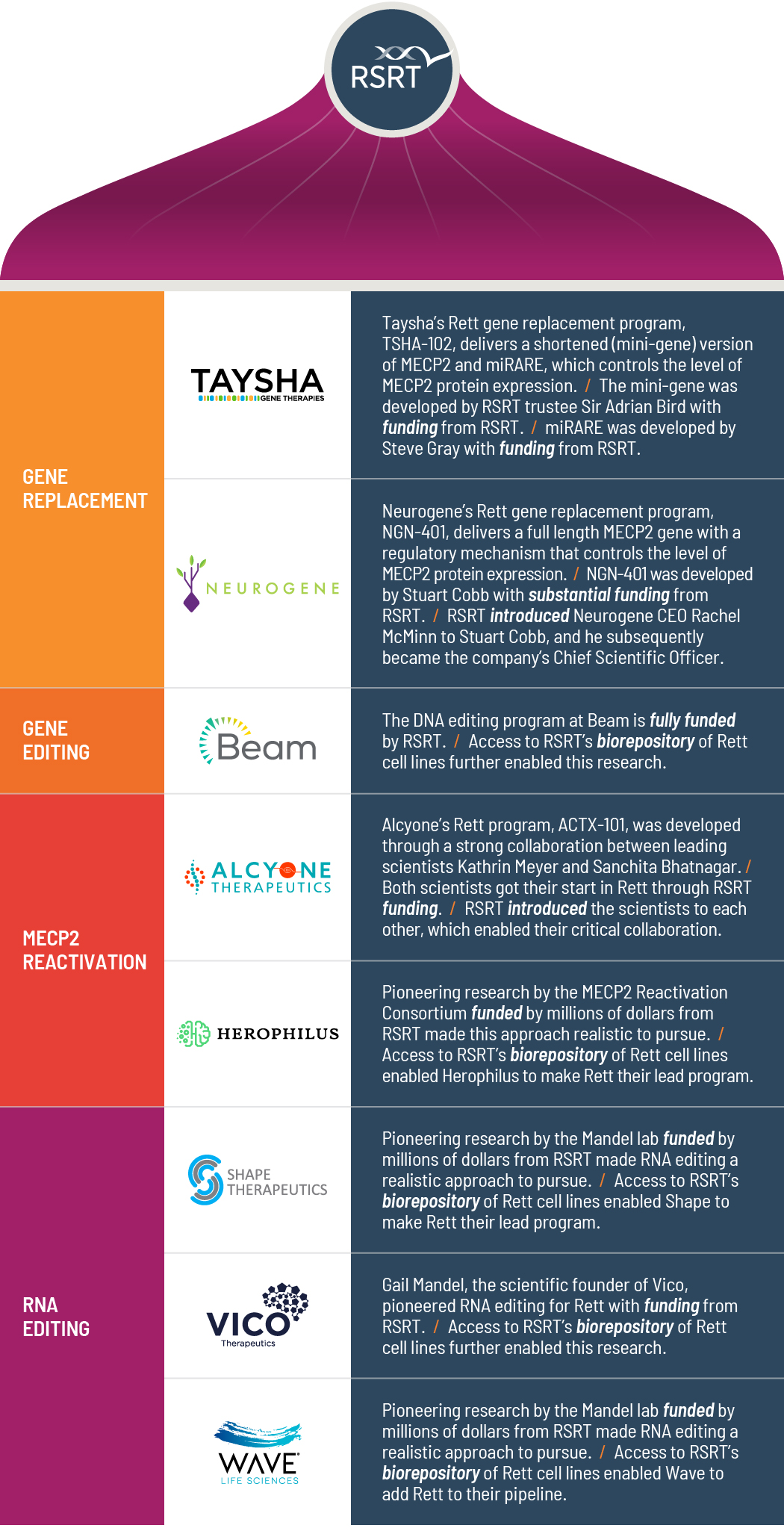 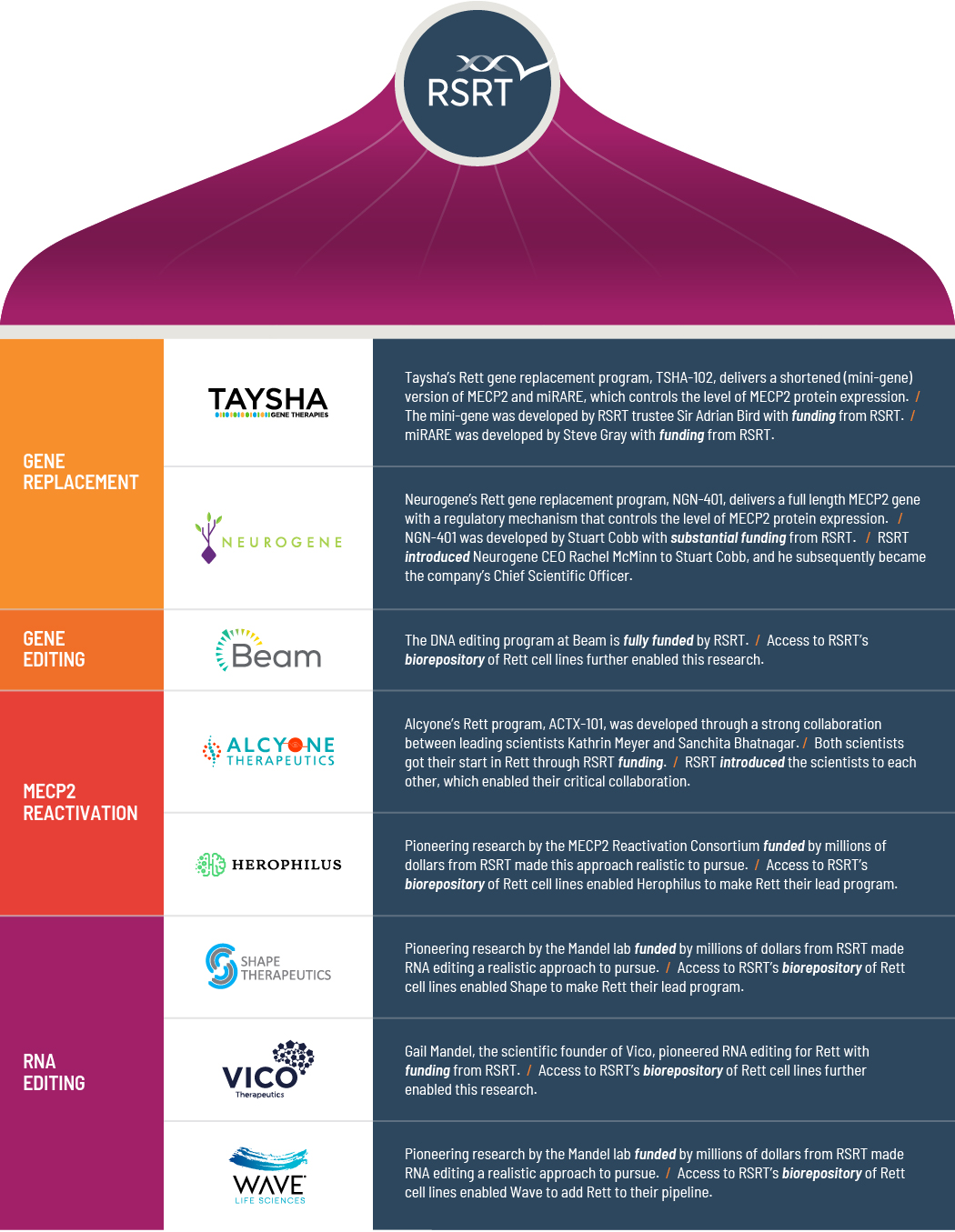 RSRT funding introduced and expanded novel therapeutic areas for Rett that did not exist before.

Awarded $66 million for our plan to cure Rett. By compiling an extensive repository of research tools and ensuring these resources are widely available to scientists, RSRT is accelerating basic and translational research efforts in a meaningful and tangible way.