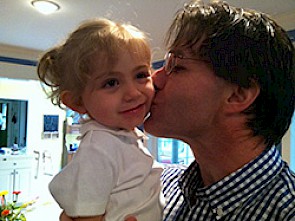 A year and a half ago my wife, Rachel, and I received the worst phone call of our lives—it was the Children’s Hospital of Pennsylvania informing us that our beautiful, bright-eyed, giggling two-and-a-half year old daughter, Eleanor, had tested positive for the MECP2 mutation that causes Rett Syndrome. We were simply devastated and didn’t know what to do or where to turn. The ensuing months were the hardest of our lives. Our dreams and hopes for our only child had been crushed. We watched helplessly as Eleanor stopped scooting on her rear end, as she had been doing, and developed a repetitive hand motion and other symptoms.

Several months later, Rachel found the RSRT website. We made a call and RSRT’s co-founder and executive director, Monica Coenraads, answered the phone. We soon learned that we were not alone in our sadness and that there was a community of wonderful, supportive parents, grandparents, family members, and friends of families who have been impacted by Rett Syndrome. And even more exciting, we learned that there was hope for a cure for Rett. In fact, it was clear that there was a good deal more than hope—Rett symptoms had been reversed in an animal model, and very promising scientific progress was being made, much of it encouraged and supported by RSRT.

Monica and I continued to correspond. I was seeking her advice and thoughts about Eleanor’s diagnosis, and I was trying to understand the research and science. Monica began seeking my advice about fundraising and public relations when she learned that I headed the development office of the Woodrow Wilson Foundation in Princeton, New Jersey, and before that had served as director of development at Columbia University’s Teachers College. It may have dawned on Monica and me at the same time that there was a fit here—that I cared deeply and personally about the work that RSRT was doing and that I had nearly 20 years of experience that could help grow RSRT and its impact on the lives of girls and women with Rett. 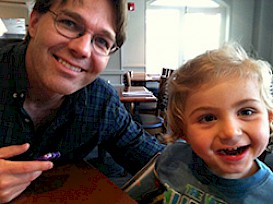 The rest, to use the cliché, is history. My first official day as a Program Director at RSRT was June 17. Under Monica’s direction, I’m responsible for fundraising, public relations, and strategic thinking about the organization. I couldn’t be more excited. So many people, Monica foremost among them, have worked so hard and contributed so much to making RSRT the respected force that it is and to building the cumulative scientific knowledge that will lead to a cure. I’m honored and humbled to join this team. Frankly, I never imagined that I would be able to put my knowledge and skills to use for something so important to me.

I’ve gone on longer than I intended, but I have one further thought. I’ve been thinking lately about President Kennedy’s 1961 speech to Congress in which he announce the dramatic and ambitious goal of sending an American to the Moon before the end of the decade. It took a huge team effort, conviction and confidence in a very clear mission, ample resources, and leadership, for the goal to be met. I think RSRT’s goal is not unlike President Kennedy’s in its ambition, its clarity, its importance, and its attainability. I also believe that all of us working together are the team that will get us to the moon. And, like building a rocket, a cure depends on cumulative knowledge that is the sum of its parts. The rocket needs its nose cone, its fuel tank, its electronics, its landing pads, and other components to meet the goal. Research is like this too. All the parts have to work together. It is cumulative knowledge that will get us there. 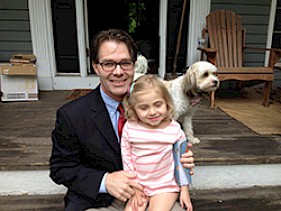 I am tremendously grateful to Monica, to the RSRT Board, and to all of you who contribute your time, energy, and resources to RSRT for your confidence in me. I promise Eleanor and all of our daughters that I will do my best in everything I do for RSRT. I will need your help, advice, and counsel—most of you know RSRT and all of its accomplishments and the Rett community at large far better than I do—so I hope I can call on you. Please don’t hesitate to contact me any time. My office line is 609-309-5676; my cell is 609-815-5102; and my email is tim@rsrt.org. I look forward to meeting you.