Our precious daughter, Zoey, was diagnosed with Rett Syndrome on May 13, 2016 at 21 months of age. Although we knew something had to be causing all of her delays and slow progress, we were absolutely devastated by the news that it was something as debilitating as Rett. At our insistence, our geneticist had agreed to test for it for “peace of mind,” which is a far cry from the news we received. We were in a fog for at least three weeks following the diagnosis. For the first few days, it was all I could do to get off the couch and tend to Zoey’s needs. I still have those days from time to time, especially when Zoey develops a new symptom or regresses further, but we’ve been too busy taking action to help Zoey for it to happen often.

Ironically, we received the diagnosis on Friday the 13th, by phone. We were given an appointment at the Rett clinic at the Children’s Hospital of Philadelphia on Monday, just three days later. Despite the genetic counselor’s recommendations, I could not stay off the internet that weekend looking for any glimmer of hope for our situation. I immediately joined the family support forum on Facebook, and had MANY people reach out to me. One of the first moms to contact me happened to be a graduate of the same high school that I attended, and lives very close to my parents in New Jersey. Although we mostly talked about our girls and the emotions surrounding the diagnosis and did not discuss fundraising at that point, she appeared very confident that a cure would be in our daughters’ future. I later learned that she and her family hold a fundraising event in Philadelphia every year for RSRT. Another mom from California also contacted me because our daughters are the same age, and she gave me a great deal of information on the fastest way to obtain a Tobii eye gaze device for Zoey and told me about her involvement in Reverse Rett LA, a large fundraising event for RSRT. She was also very confident that there would be a cure. 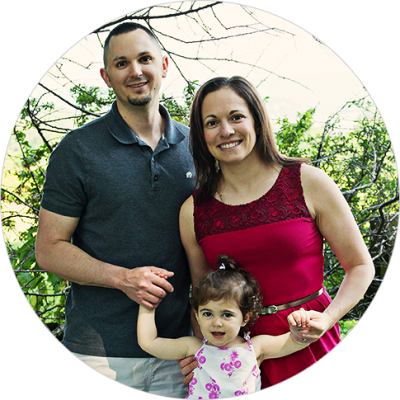 Following Zoey’s diagnosis, I also had great people from several organizations reach out to me, including Monica Coenraads and Tim Freeman from RSRT. I was immediately impressed by their knowledge of the research and their dedication to funding quality research toward treatments and a cure for Rett. RSRT has a very streamlined approach, prioritizing the research avenues that are showing the most promise, and 96% of the money raised goes directly to research. Although we feel that other organizations do great work and that family support is important, we decided that we would like any money we raised to go directly to curing our daughter and other girls with Rett as quickly as possible. RSRT funds several projects that target MECP2 specifically, which theoretically would have the most profound effect on our girls’ quality of life. They fund projects for symptomatic treatments as well. Although RSRT’s main focus is not on family support, Monica and Tim are more than willing to speak with parents and our family has connected with several other families who are involved with RSRT, online, at fundraising events, and at informal gatherings.

RSRT launched RettGive, their crowdfunding site for Rett research, just in time for Zoey’s 2nd birthday in July, and we decided to start a campaign. It was very easy to do, and we were overwhelmed by the generosity of our family and friends. Zoey’s grandfather is a retiree from the Hershey Company, and many of his former colleagues donated to the cause, and the company matched their contributions. We also received many donations from people with whom I am connected on Facebook, even though many of them have not seen me for years. We received donations in many different amounts, and it all added up to over $21,000, which we could not be happier with! We chose to do a RettGive campaign instead of an event, simply because we were overwhelmed by our new diagnosis and because our family and friends are so spread out that we were not sure an event would have a good turnout. We do hope to join with other families in the future to do an event and raise even more money, but if enough families start RettGive campaigns and raise even a couple thousand apiece, the total amount raised could have a huge impact. Every dollar counts!

Some may think that we are living in a fantasy world and are in denial about our daughter having a lifelong disability. I will admit that that thought went through my head when I first heard the word “cure,”, until I read RSRT’s website and talked to Monica about the research. There is substantial evidence that a cure is within reach for our girls. In the meantime, we are doing everything in our power to give Zoey the best life possible, keep her in the best shape we can, and just enjoy her, but we want so much more for her, and research is the way to make it happen.