Many of you know that my involvement in Rett Syndrome is personal. I have a daughter who suffers greatly from every Rett symptom in the book. She is now 15 years old and every year brings new challenges. In the last six months she has developed severe Parkinsonian symptoms: violent tremors, increased rigidity, difficulty initiating movement. 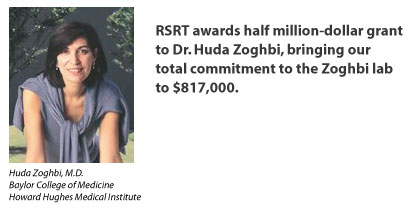 Despite the increased hardships I cannot help but be optimistic. The news from the scientific community continues to be encouraging and I have not heard one shred of data to dampen my optimism. As I reflect on the state of the current research I am particularly struck by one thing: the number of potential treatment approaches that we are pursuing in parallel. From gene therapy and exploration of modifier genes to repurposing of drugs, there is certainly no lack of ideas about how to reverse Rett Syndrome or modulate symptoms. That simple fact lifts me up even on those dark “Rett days.”

Today RSRT is pleased to announce that we are adding to our portfolio of potential treatment options with $515,054 of new funding for Huda Zoghbi and her lab. Dr. Zoghbi needs no introduction to anyone familiar with Rett Syndrome. She identified MECP2 mutations as the cause of Rett Syndrome in 1999 and has consistently added to our body of knowledge about the disorder, the animal models and the protein in the years since then. Simply put, the field of Rett would look very different without Dr. Zoghbi.

This latest award, entitled “Investigating Novel Therapeutic Approaches for Rett Syndrome” includes three separate objectives, each of which has potential clinical relevance.
The first objective tests a pharmacological intervention while the other two are aimed at altering the activity of the neural network.

1) Test drugs on Rett mouse models to enhance the cholinergic pathway.
This neurotransmitter pathway is critical for learning, memory and regulation of the autonomic nervous system. Drugs exist that can be used alone or in combination. If we find the data from mouse models encouraging, then the findings could be immediately transitioned into clinical trials.

2) Explore deep brain stimulation (DBS) as novel treatment strategy.
DBS has revolutionized the treatment of Parkinson’s and is now also used for depression, OCD, Alzheimer’s and more recently in pediatric disorders such as dystonia and Tourette. The availability of Rett mouse models allows us the opportunity to explore potential benefits of this procedure for Rett. Again, encouraging data can be quickly moved to the clinic. 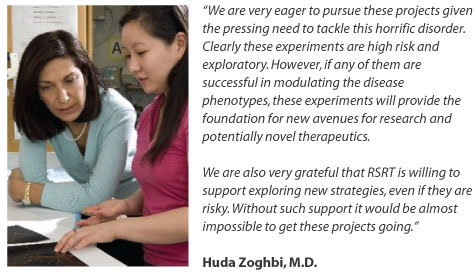 3) Boosting Mecp2 levels in normal cells.
Girls with Rett have approximately 50% normal cells and 50% cells which lack the MeCP2 protein. Dr. Zoghbi will explore whether boosting MeCP2 levels in the cells that already have normal amount could enhance the overall neural network activity even though the other 50% have no protein. If boosting levels in normal cells rescues some of the symptoms this would set the stage for a large scale effort to identify targets that can modulate MeCP2 levels.

Please join me in congratulating Dr. Zoghbi on this award and wishing her the very best as she pursues these new lines of inquiry. I’d also like to take this opportunity to congratulate her once again on being awarded the prestigious 2011 Gruber Neuroscience Prize which was presented during last month’s annual meeting of the Society for Neuroscience.