This blog post will deviate from our typical scientific pieces to focus on a clinical aspect of Rett: scoliosis. As a mother, I can testify that the mere thought of scoliosis surgery makes my knees weak and my stomach queasy. I’ve spoken to enough parents during the past decade to know I’m not alone in these emotions. My hope is to engage families and their network of doctors, therapists and educators in a dialogue about the potential treatment and - even better - the prevention of scoliosis in Rett Syndrome.

My daughter with Rett is 13 years old, and she is on the severe end of the spectrum. One area in which we’ve had some success is orthopedics. We’ve managed to improve her scoliosis through an intense program of physical therapy (PT), massage, chiropractic and cranio-sacral work.

Below are excerpts from a conversation with Dr. Vishal Sarwahi, the Director of the Spine Deformity Service and a team member of the Rett Syndrome Center at Children’s Hospital at Montefiore, in the Bronx, NY, run by Dr. Sasha Djukic.

MC: I think of Rett as exerting its power over our children 24 hours a day. One way to fight back the physical challenges Rett imposes is through therapies. One hour a day of impactful physical therapy brings the score, so to speak, to Rett 23, Child 1. Each time my daughter visits her therapist she goes in with a slight curve and comes out straight. It’s a constant battle. Rett pulls her one way, we pull her the other. The key is to fight that battle each day or you lose ground.

So one thing I would like to share with parents and get them thinking about is an intensity level that may be crucial. Without evidence-based research, which is currently lacking, proving that intensity is important is very difficult. Families are left to negotiate with their schools and their insurance companies.

VS: You are right. There is no clear scientific evidence that physical therapy can alter the natural history of scoliosis. If parents ask me if physical therapy helps - the answer is a resounding YES. But is there any scientific evidence that it will change the natural history of scoliosis? The answer is NO - because, to date, there are no published studies. Personally I am confident that PT, if done properly by a good therapist, and as you say, for an appropriate amount of time, is very helpful. But it's difficult to put a number to the required hours. I would say perhaps an hour per day to work on various forms of activities to condition the back and keep it strong, and not just the back but the abdominal muscles as well.

Your own daughter, who does not walk independently, is a great example because scoliosis tends to happen more commonly in kids who do not ambulate. And the fact that she has been through growth spurts without having major changes in her back is key. The problem is scientifically proving that it’s the PT that is responsible. How do we know whether she is in the small percentage of cases that have very minor scoliosis?

MC: Actually, her scoliosis has gotten better. How many kids with Rett have curves that get better?

MC: Can you talk a little bit about pancreatitis and the increased risk after surgery that parents should be aware of? This is one of several concerns about which parents can take a proactive stance, if they are well-informed.

VS: Yes, individuals who undergo scoliosis surgery have a higher risk of pancreatitis. There are some studies which show that the risk is even higher in kids with neuromuscular disorders. It’s very difficult to understand why they get pancreatitis – there are multiple theories. One theory is that maybe the morphine they get for pain shuts down the sphincter and there's some regurgitation of juices back into the pancreas, causing a chemical pancreatitis. It usually presents in the first week after surgery and can affect between 15 – 30% of patients. In our center we don't see it as frequently, our percentages range from 10-15% perhaps because we follow a much stricter protocol than most, including routinely checking pancreatic enzyme levels. In nonverbal children we palpate the belly and if the heart rate goes up that suggests the child is in discomfort or pain. If the enzymes are on the higher side we can do an ultrasound to rule it out. The treatment is no food by mouth until the enzymes resolve. Bottom line, pancreatitis in the nonverbal patients is something we have to look for. If the parents are aware, if the physicians are aware, if the surgical team is aware then it’s more likely that it can be diagnosed sooner. Not sure we can say that it can be avoided, but it can be diagnosed sooner and at least be taken care of, because the complications sometimes are severe.

MC: Pain medications are another issue that I find very concerning. There are publications that say that children with Rett Syndrome have great tolerance for pain. I'm not always sure that their pain is properly cared for after surgery. My personal hypothesis is that they feel pain just like the rest of us but they don't express it the way we would expect them to react to pain. And so I sometimes think the interpretation is that they don't feel pain or they have a high pain threshold. And I'm not sure that's it at all.

VS: So this is a topic very close to my heart, actually. It's very difficult for us to gauge pain. First, I always trust the parent. One thing I teach my residents is that the mother knows best. If the mother says the child is in pain then the child is in pain. But even a mother sometimes has difficulty gauging pain levels. So we look at the blood pressure and heart rate. Shallow breathing can often mean pain. And at the Rett center we also take into consideration that children with Rett can have a very irregular breathing pattern.

MC: What about seizures? I mean how often would you expect to see a child having seizures after surgery as this can be very jarring to the body.

VS: Of course, the neurologist has to be on board and part of the team. And much depends on the fixation that has been used. For our children, seizures---or even if a child were to take a tumble---should not cause damage per se. I don’t brace any of my children after surgery, or use casts.

MC: Another area of concern for Rett Syndrome patients, some of whom have mitochondrial and other issues, is the type of anesthesia. So what kind of background work is done to determine what kind of anesthesia is going to be used?

VS: Our approach to anesthesia is always multidisciplinary. We go over the precautions and contraindications. At our center we actually have two anesthesiologists, and a pediatric anesthesiologist is always involved in the scoliosis surgeries.

MC: I understand at Montefiore you routinely test for metal allergies before surgeries. I can't imagine anything more horrific than to put all of the hardware in and then have to take it all out due to an allergic reaction. I know from speaking with parents that most Rett patients are not tested for this prior to surgery. My own daughter has never worn jewelry or belt buckles, so the possibility of allergies naturally coming to light may be slim.

VS: Typically an allergy to metal has a very slow onset. It's not like anaphylaxis where you see it right away. Nevertheless we have decided to routinely test although it’s expensive and time consuming. Better to be safe.

MC: Congratulations to your center for taking a precautionary approach, and I hope this will become more widespread. At least our readers are now armed with the knowledge to ask for this testing if it is not offered as a matter of course.

MC: Now for more of a research question… Where do you see the science moving? I mean do you think that eventually these types of scoliosis that are neuromuscular, neurogenic in nature, do you think they will be preventable at some point or treatable in such a way that surgery will no longer be necessary?

VS: Well, my hope is yes. As of now, a gene for idiopathic scoliosis, which is the most common scoliosis and not the neuromuscular type, has been identified. Whether that is the only gene, and how that gene expresses itself, is still unknown. For neuromuscular scoliosis it's unclear if there's a specific scoliosis gene that is causing it. And in Rett Syndrome, is it a gene directly associated with MECP2 or is the scoliosis secondary to a neuromuscular imbalance? It may be the latter. My fervent hope is once again that we figure out how to fix that.

MC: Do you think that there should be more exploration, beyond PT or bracing, to help correct this imbalance, along the lines perhaps of the use of Botox?

VS: Well I do find it difficult to accept the philosophy that scoliosis in Rett Syndrome is inevitable. I find there's this philosophy every child is doomed to have it and there's very little to do. If parents and doctors believe that you fall into a vicious cycle and there’s not enough focus on innovative strategies. 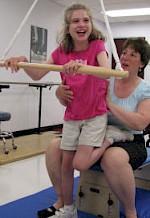 MC: I agree with you. In general, the literature about Rett talks about these four stages, and the motor degeneration at the fourth stage. I can't help but think that what may be contributing to this degeneration is that the children are growing bigger and heavier, they aren’t receiving the same level of services that were available when they were younger through the schools and other programs, and the parents are getting older and more tired, So there’s an overall reduction in resources and therapies, fewer therapists involved, and we have to wonder how much degeneration is due to the disease itself and the natural progression, and how much is due to external circumstances.

VS: There's always the question of nature versus nurture in Rett, and it may be that with optimal and very individualized services for each child and adult, there is much more wiggle room, more variation and chance for solid improvement than the Rett community as a whole has had the opportunity to fully explore and document. But I think this type of discussion is interesting; it raises awareness and challenges us to do better.

MC: Thank you, Dr Sarwahi, for your time and the care with which you address these issues. I hope we can continue to dialogue as we look toward new and innovative approaches.