Rett Syndrome In a Petri Dish

On November 11th the high-profile journal Cell published a paper by Alysson Muotri, Ph.D. entitled A Model for Neural Development and Treatment of Rett Syndrome Using Human Induced Pluripotent Stem Cells. The stem cell field has seen amazing progress in the last few years. Induced Pluripotent Stem Cells (iPS cells) is an especially hot area because of the clinical implications. Simply put, iPS cells allow you to study diseased cells up close and personal through their entire lifecycle. Importantly, any deficits that are identified in the cells can be used as read-outs in drug screening endeavors.

I’ve had the pleasure of knowing Dr. Muotri for a number of years, in fact since his introduction to Rett about six years ago. He became interested in the disorder while doing his post-doc in the lab of Fred (Rusty) Gage at the Salk Institute in La Jolla, CA. Thankfully his interest has continued now that he is an independent investigator at UCSD.

Dr. Muotri and colleagues discuss their new findings in a 4 minute video. Below is an excerpt from a conversation Dr. Muotri and I had regarding his paper.

MC Dr. Muotri, congratulations on your Cell paper which has strong implications for drug development and therefore is of interest to anyone who loves a child with Rett Syndrome. I know this is a very hectic time so thank you for taking time out to speak with me.

I’m curious, what drew you to a science career?

AM I’ve always been interested in understanding how things work. I reasoned that science was the most obvious way to achieve that. You know that I’m from Brazil. I received my PhD in genetics from the University of São Paulo. I started off in the cancer biology field but quickly switched to neuroscience in 2002 when I moved to the Salk Institute. I was there for 6 years until I got my current position here at UCSD two years ago.

MC I’m assuming it was a significant switch moving into neuroscience from cancer biology.

AM Yes, it was a bit intimidating in the beginning because there was so much to learn. But I welcomed the challenge. And as it turned out my experiences from cancer were beneficial for my transition into neuroscience. For example, when I moved to Rusty’s lab one of the first observations we made was related to a phenomenon called transposons. I knew from my previous work that retrotransposons are very active in cancer cells and I remember discussing this with my neuroscience colleagues. Most of them were not very familiar with this phenomenon and assumed it was insignificant. My feeling was that if these transpositions were really happening in the brain it would be better to look at it closely because it could be involved in a new mechanism related to brain development.

MC Since retrotransposons are actually the topic of your next Rett paper coming out in Nature soon let me take a moment to give our readers a little background information.

Dr. Muotri, would you like to give us a glimpse into your upcoming paper that deals with retrotransposons in Rett Syndrome?

AM So the idea is that retrotransposons , which jump around inserting themselves into the genome, result in neurons, in the same individual, which are genetically different from each other. We observed that MECP2, the gene involved in Rett Syndrome, is a major repressor of this activity. Also, we determined that these jumping events are pretty much exclusive to the brain and MECP2 seems to be one of the gate keepers controlling the amount of the activity.

MC So in a brain that is deficient in the MeCP2 protein there would be increased jumping events?

AM That is right. It remains to be seen whether these extra events contribute to the symptoms of Rett or whether the brain simply compensates and manages to work around them. We are working on this question now.

MC Fascinating. I look forward to continuing our dialogue on this subject as your research progresses. Two high profile papers in one month – very impressive.

Now, getting back to iPS. This is a field that has seen amazing advances in a short period of time. Can you highlight for our readers the excitement surrounding these cells? 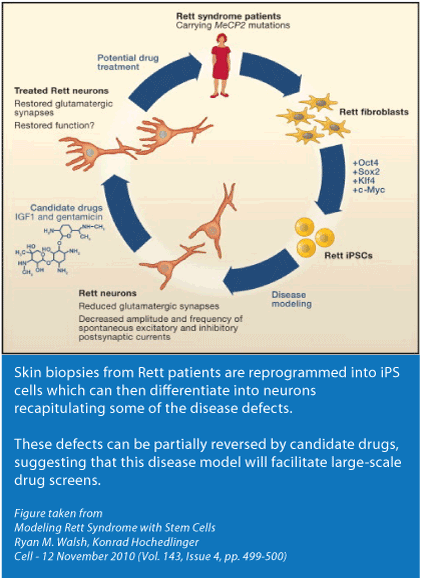 AM The dream of neuroscientists is to understand the early stages of a neurological disorder. Until recently we had two options to achieve this. One is to develop a mouse model that will hopefully recapitulate the symptoms seen in humans. Of course a limitation of a mouse model is that it’s a mouse and not a human - the brain of a human is so much more complex. The other option is post-mortem brain tissue. The problem is that at that stage the damage is already done and what you see is the end stage of a disease. To really study a disease it’s beneficial to have the most primitive cell line possible and then to coax these cells into a variety of different cell populations and to study what happens at various time points.

An important breakthrough happened a few years ago that has made this type of work very feasible. The Japanese group headed by Shinya Yamanaka surprised the world when they showed that you can reprogram cells that have already differentiated back to a more naïve state resembling a human embryonic stem cell. This allows us to capture the genome of a person, including any genetic mutations, and allows us to study the neurons and other cells of interest and see how a disease progresses and what changes happen at the molecular level.

MC In general the Rett field has relied on the mouse models as their standard assay. In terms of drug screening that’s a very expensive assay. Having iPS lines with MECP2 mutations gives scientists the ability to have a cellular assay to screen for therapeutics. Thousands, and in fact, hundreds of thousands of compounds can be efficiently and quickly screened in cell lines using either low or high throughput technologies.

Can you tell us about the phenotypes that you have identified in the cells. (a phenotype is an observable characteristic or trait)

AM One of the phenotypes was related to cell soma size (cell body) of a neuron. Just looking at neurons under the microscope we saw that Rett neurons are reduced in size by 10%. That might not seem like a big deal but when you consider the 3 dimensional structure of the neuron; a 10% reduction is very significant. So size was the simplest read-out that we found.

Another phenotype is related to the morphology of neurons. (Morphology is the study of the structure and form of an organism.) The idea to look at morphology was inspired by the reports over the last decade from post-mortem brain tissue in both people and animal models. We focused on the number of spine densities in neurons and we also saw a reduction. (A dendritic spine, or simply spine, is a small membranous protrusion from a neuron's dendrite that typically receives input from a synapse.) We looked at neuronal networks and found deficiencies in their ability to communicate.

MC You made iPS cells with different MECP2 mutations. You found that the phenotypes were consistent among mutations. Can you elaborate?

AM Yes, the four different mutations we studied led to similar phenotypes. At least the phenotypes we looked at. We were convinced that this was a strong suggestion pointing to a loss of MeCP2 function. Thus, we knocked down MeCP2 expression from control neurons and obtained the same result. We then, restored the normal MeCP2 gene in Rett neurons, suppressing the phenotypes. In combination, these experiments suggest that MeCP2 is responsible for the alterations in Rett neurons. The fact that several MeCP2 mutants revealed a similar phenotype has clinical relevancy because it may indicate that a single drug may correct them all.

MC So the goal is to use these cells as a platform for drug screening.

AM Absolutely. As a proof of principle we added a growth factor, IGF1, to the cells. As you know a paper was published in PNAS in early 2009 showing that a compound similar to IGF1 improved some of the symptoms in mice so we decided to try it in our system. We found that IGF1 corrected the phenotype, in fact it over-corrected. The over-correction is something that needs to be considered in terms of the clinical trial, a proper dose tuning in each patient is desirable. Also, something to keep in mind is that while I put IGF1 directly into the cells in the clinical trial the IGF1 has to get into the brain and we know that that doesn’t happen as much as we would like.

The other drug we tried is gentamicin , an antibiotic that has the ability to “read through” premature stop codons (nonsense mutations that end in X, such as 255X, 168X) . We found that gentamicin restored levels of the MeCP2 and phenotypically rescued the cells.

MC That is pretty interesting especially in light of the fact that read through drugs act by substituting the stop codon with a random amino acid. So in effect they swap out one mutation for another.

AM We checked that and found that the protein level was normal but there was no way for us to see what mutation was inserted. Part of the new protein that is synthesized in the presence of gentamicin, is probably correct and we believe that is exactly what is reverting the phenotypes.

MC It’s important to note that gentamicin is highly toxic and doesn’t cross the blood brain barrier very well either so this is not a drug that can be used now for the treatment of Rett Syndrome. There are however other drugs with similar modes of action that being tested in animal models.

But the take home message from your data is that iPS cell lines are an in vitro model system for Rett Syndrome and can be utilized in a drug screening platform. What are next steps to utilize the iPS lines as a platform for drug screening?

AM The next step is to scale this up and that is not easy to do. Because the experiments are very sensitive to variables and there are many steps during the conversion of the iPS cells to neurons. Thus, we need to systematically validate all the variables and make the system as robust as possible. Finally, we need to choose the appropriate read-outs (the cellular phenotypes) we would like to use. It is important to design these experiments carefully so one doesn’t lose time with false positives. My lab was recently awarded a CIRM grant (California Institute for Regenerative Medicine) exactly to optimize these steps, so I would like to start this as soon as possible. Finally, I would like to test libraries of drugs that previously failed clinical trials for other diseases. Drug repositioning, as this concept is called, is attractive because repurposed drugs can bypass much of the early cost and time needed to bring a drug to market.

MC I found your paper very encouraging for a number of reasons. Firstly, your data continues to confirm and validate the concept that Rett is reversible. Secondly, you showed that the iPS platform can be used for drug screening. Thirdly, your data suggests that while there may be many mutations in MECP2, they may share common phenotypes. That may be an important issue in terms of treatment strategies.

Dr. Muotri, I’m sure I speak for every Rett family who reads this interview … we wish you great luck and god speed in your work.