A New Mode of Action for MECP2

That mutations in the MECP2 gene cause Rett Syndrome has been known for over a decade. But what exactly the protein does is not yet clear.

In the early 90s, Adrian Bird’s group purified MeCP2—which stands for methyl-CpG binding protein 2—and named the protein for its ability to bind parts of the DNA with a chemical tag called a methyl. Methyls tend to dampen the expression of genes, suggesting that MeCP2’s function is to silence genes.

Studies published since then suggest MeCP2 activates or represses the expression of many genes. Other results suggest that the protein binds throughout the genome, influencing the way DNA packs into a cell.

New evidence, published today (December 21) in Cell, shows that MeCP2 binds to spots throughout the genome that are tagged with the chemical, 5-hydroxymethylcytosine (5hmC) in mice, and that this interaction may be important for understanding Rett Syndrome.

“ a very interesting new development in studying the functional significance of MeCP2, which we have to understand if we’re going to understand Rett Syndrome,” says Bird, professor of genetics at the University of Edinburgh in Scotland who was not involved with work.

Abundant in the DNA of certain brain cells, 5hmC seems to be a signpost of sorts for active spots within the genome — that is, the regions that are churning out new protein — the study found. MeCP2’s latching onto these sites supports its potential role as a gene activator, though it’s clear that the case of what MeCP2 does is far from closed. 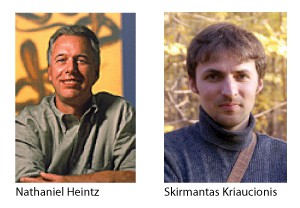 “Whether or not directly involved in activation is still a matter of further investigation. But we know that it can localize to a region that contains 5hmC and active genes,” says Skirmantas Kriaucionis, group head in the University of Oxford Nuffield Department of Medicine, who co-led the study with Nathaniel Heintz of the Rockefeller University in New York.

As a postdoctoral researcher in Heintz’s lab, Kriaucionis found 5hmC in 2009 by accident when he was looking at how a closely related chemical, 5-methylcytosine (5mC), influences genome structure in brain cells. Anjana Rao’s group, then at Harvard Medical School, working independently from Heintz’s lab, confirmed the existence of 5hmC in the same issue of the journal.

Researchers consider 5mC a fifth base, and 5hmC a sixth base, of DNA, which is traditionally thought of as a string of four different chemicals called nucleotides. 5mC and 5hmC resemble the traditional base cytosine, but with a methyl group added on, making 5mC, and a hydroxy group added to the methyl, creating 5hmC. The new study confirmed that patterns of these chemical modifications to the genome are different in each cell and influence which genes are turned on or off and when.

The discovery of 5hmC opened up a new area of work—and hundreds of new papers—focused on where the nucleotide is in the genomes of different cell types, and what it’s doing.

In the new study, using an explorative molecular assay to fish for a binding partner for 5hmC, the group identified the molecule as MeCP2, and nothing else. “It was really a surprise,” Kriaucionis says.

“This paper is the second paper to suggest a candidate binding protein for 5hmC,” says Rao, now a professor of signaling and gene expression research at the La Jolla Institute for Allergy and Immunology, who was not involved with the new study. Other findings have proposed a different molecule, MBD3, as a candidate, but those and the new results need further investigation, she adds.

“So far, both candidates — MBD3 and MeCP2—also bind 5mC, so an exclusive binding protein for 5hmC has not yet emerged,” Rao says.

Indeed, contradicting the new evidence that MeCP2 binds 5hmC and 5mC equally, some previous studies show that MeCP2 much prefers binding to 5mC over 5hmC. For example, a study published earlier this year shows that says MeCP2 is nearly 20 times more likely to bind 5mC than 5hmC.

In the new study, Kriaucionis and his colleagues observed that a certain Rett-causing mutation, called R133C—which is responsible for a relatively milder form of the disorder—disrupts MeCP2’s binding to 5hmC.

“ is really interesting because it allows us to speculate that MeCP2 binding to 5hmC is important as a part of the function which causes Rett Syndrome,” Kriaucionis says.

The evidence now “strongly suggests” the potential involvement of 5hmC in Rett, says Peng Jin, an associate professor of human genetics who was not involved with the new study. A study his group published last year in Nature Neuroscience found that patterns of 5hmC are altered in mouse models of Rett.

Interestingly, the R133C mutation only slightly dampens MeCP2’s interaction with 5mC, suggesting that MeCP2’s binding with 5mC serves a different purpose than that of MeCP2 and 5hmC.

Other Rett-causing mutations in MeCP2 examined by the group don’t seem to affect binding to 5hmC, meaning 5hmC binding does not fully explain the symptoms of Rett. “It will be important to test further the contribution of 5hmC to Rett Syndrome," notes Jin, adding that there are mouse models available to do so. Those mutant mice lack the enzymes needed to convert 5mC to 5hmC.

In the new study, researchers studied only a few types of neurons, but there are hundreds of cell types in the brain. Kriaucionis thinks that MeCP2 binds to 5hmC in other cells.

The 5hmC patterns themselves are cell-specific, however, perhaps further complicating the story of MeCP2.

“We really need to get more data to understand whether or not, how different 5hmC and MeCP2 localization would be in different cell types,” Kriaucionis says. “It’s an important component to understand MeCP2 function,” and how scientists might think about future treatment.

Cell podcast with Nat Heintz (click on PaperClip on right)