Rett syndrome-causing missense mutations cluster in two regions of MECP2. One of these regions - the methyl-CpG binding domain (MBD) - has been extensively characterized and helps MeCP2 bind DNA. The other region is called the NCoR/SMRT interaction domain (NID) and recruits a gene-silencing complex, but its function has remained comparatively mysterious.

Why are mutations in the NID so debilitating?

Dr. Adrian Bird and colleagues at the University of Edinburgh explored the function of the NID and identified a molecular partnership that is crucial for brain function. Their work is published this week in the journal Proceedings of the National Academy of Sciences. 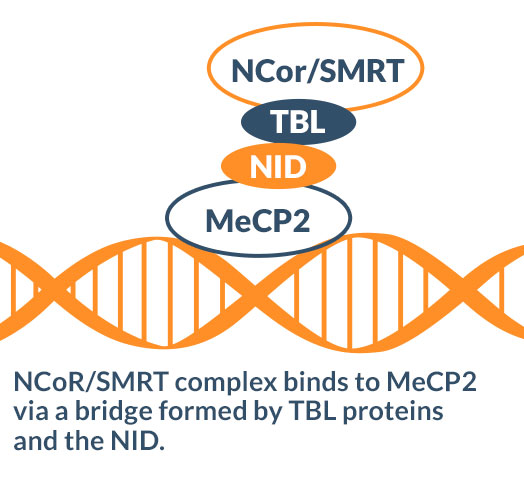 This study shows that the interaction between MeCP2, TBLs, and DNA is crucial for brain function - disruption of this complex causes severe disability. But why? Dr. Matthew Lyst, an author on the paper, acknowledges, “this is a huge unanswered question for the field.” He says their next steps are to investigate which parts of the complex mediate MeCP2 function and to develop treatments that stabilize the interaction between mutant proteins.