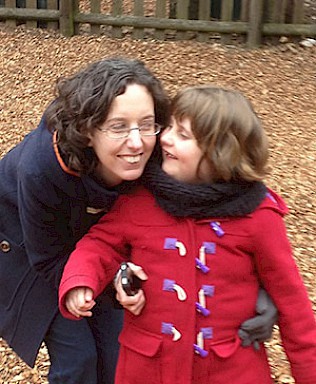 Someone once told me that hope is what distinguishes humans from every other species; our ability to look to a potential future rather than live solely in the here and now. This is, of course, wildly inaccurate; I am not a biologist or anthropologist (or any other ‘ist’ for that matter), but I believe there are a number of other factors which separate humans from the species around us (not least, an opposable digit!). But the concept has stuck with me and, since most of my life is built around hope, it cannot help but strike a chord.

Three weeks ago, Hannah had four medical appointments in five days and a multitude of other issues which needed addressing. Hope permeated them all. I hoped, for example, that we would manage to get a disabled parking space at the hospital; I hoped that the wait wouldn’t be so long that we lost Hannah’s good will before we even got in the room; I hoped that the ECG results would show that the recent episodes we have observed are not seizures; I hoped that the locum SLT (who barely knows Hannah) would recognize that eye gaze is her best possible chance at communication and would therefore support our application for the technology; I hoped that the engineer would say he could adapt Hannah’s trike to make it big enough for a child who should be riding a bike; I hoped that the physio would approve a height adjustable bed to prevent our inevitable back injuries; I hoped the eye unit would finally discharge us because, (take note SLT!), her eyes do work; I hoped the blood tests results would require no more than three adults to hold Hannah down; most of all I hoped we would make it through each appointment without a total meltdown (Hannah’s, not mine!)

Sorry, that’s wrong, that is not what I hoped most of all. Most of all, I hoped, with every second of every appointment and of every minute in between, that one day none of this will be needed. I hoped that one day the ‘professionals’ involved in my little girl’s life will be her teachers, her GP and her dentist. And that’s all.

Two weeks ago, the routine medical appointments were replaced by an unexpected admission to hospital. Her first. (What a strange world we now live in, where I know that making it through six years without a hospital admission makes us incredibly lucky). An infection, the source of which remains unknown, has made my cheeky and (hitherto) still mobile little girl, lethargic, disengaged, and unwilling to walk. Most worryingly, it has put out the sparkle in her eyes. Now the professionals involved reach an all-time high, as does my reliance on hope. I watch her suddenly unable to take a step on her own, trembling violently, and I cling fiercely, with muscles I didn't even know I have, to the hope that this is not the beginning of regression, the start of a life time spent in hospital, but ‘just’ the temporary result of an infection. Something they do have a cure for.

When Hannah was first diagnosed I didn’t know enough (and didn’t allow myself to know enough) about Rett Syndrome to understand that a cure was the only hope. Then, once I started to learn more, I didn’t allow myself to believe that a cure in her lifetime was possible. It seemed too fantastical, too far out of reach, to think it could really happen in time for my little girl. Now, as I continue to learn more about what Rett really means for Hannah, and about the research going on today, I realise that a cure is not only possible, it is the ONLY possible future. I cannot allow myself to think about the possibilities of the alternatives.

Nor can I help but be frustrated and confused by those who don’t seem to share or, at the very least, support that hope. Why do ‘friends’ click ‘like’ on every trivial Facebook message out there, but ignore my posts about Rett? Why can they not take the time to vote when funding is at stake? Why can they not spare the cost of a skinny latte to help make the hope reality? Why do they so often seem to think that I should just accept how things are? Would they? I hope not! It seems to me that to accept is to admit defeat; to hope is to fight. If my hope was false, my fight for an impossible prize, I could understand why acceptance might be healthier, more practical, but it is not false. The prayer I offer every night is not one born of blind faith, for a miraculous thunderbolt from an omniscient being; it is one born of proven fact, for a miraculous breakthrough by a handful of knowledgeable scientists, supported by a group of dedicated parents, in whom my faith lies and on whom my hope depends.

Perhaps others think I should accept because they wonder about the merits of a life based on hope, on a dream for the future. Carpe diem and all that? To be honest, sometimes I have wondered too. Shouldn’t we be living for today, enjoying what is here and now rather than always looking to a future which, ultimately, we cannot guarantee will arrive in time? But the two are not mutually exclusive, surely? In fact, I would say they are co-dependent. Living in hope for the future makes today more positive too: it enables you to notice the tiny, almost imperceptible steps being made forwards, the achievements which others might miss, but which you know are all part of the journey. Why should hoping for a brighter tomorrow preclude you from seeing the light in today? I don't think it does; the light which research has switched on for Hannah's future shines in her today too. It illuminates all the other reasons to be hopeful and grateful. When you are in darkness, finding the light switch is hard, so the darkness continues, self-perpetuates, the exit remains elusive. But when you have a little light shining already, no matter how small, finding your way towards the brighter, bigger light in the distance becomes an easier journey.

Before we discovered Rett Syndrome Research Trust and the research they fund, the sense of helplessness was overwhelming. For a control freak, like me, it was impossible. Uncertainty about the future is bad enough, but feeling there is nothing you can do to change it is torture. Even fundraising didn’t feel truly hopeful, when ultimately we knew money was going towards coping with diagnosis, not in making that diagnosis a demon of the past. When I look back on that time, I remember a very dark place, not simply because of the diagnosis itself, but also because of our lack of vision of the future or of how we could influence it. Hopelessness for the future meant helplessness today. The relief that comes from feeling that you are actually doing something, that you are taking action, raising money, helping to fund the science which is holding all your hopes in its hands, this relief is a light switch. Since we turned it on, both tomorrow and today have seemed a great deal brighter.

I started writing this, and thinking about hope, several weeks ago. Every time I think it’s done, something else comes along which is so tightly bound up with hope, some new experience or emotion which makes our hopes shift and metamorphose once more, that I have to start again. When I started writing, Hannah had never been in hospital overnight. She was walking confidently, progressing, even. She’d taken an independent step or two up the stairs. We were daring to hope she might continue. Now things have changed and with them, our hopes. Today we are hoping that she returns to where she was three weeks ago, now just that would be a little miracle. I’m sure all parents’ hopes for their children change over time, evolving inevitably as the child grows and develops their own set of hopes and dreams. I expected that. I just never thought that one morning I would wake up hoping that my six year old will bear her own weight. Everything is relative – our daily, weekly, monthly hopes change, but the ultimate hope is a constant, one of the few things in my daughter’s life which will not be lost.

I started, all those weeks ago, by talking about what distinguishes humans from other species. Speech, surely has to be one of our greatest gifts. The very thing I hope for most for my daughter. I make a joke of the opposable digit, but the gift the thumb brings to us is the ability to grasp, to hold, to use our hands in ways which other animals cannot. Another fundamental skill my little girl has lost. It’s not that the loss of these things makes my daughter any less of a human being, but I cannot help but believe that it does make her a little less of Hannah: the little girl, teenager, woman she could be. I cannot know if Hannah has hope, whether she is aware enough of the things she cannot do to hope that one day she will, although the way she looks at her brothers playing and running and talking, it is hard to believe that she is not hoping to join them one day. If hope gives her the same sense of purpose and drive and determination as it brings the rest of us, then I hope that she does have hope, and that one of these days my stubborn, cheeky, sparkling little girl will tell me that her name is Hannah.