Last month brought me to Houston, Texas to attend a fascinating meeting organized by Huda Zoghbi and Morgan Sheng and co-sponsored by RSRT. Entitled Disorders of Synaptic Dysfunction, the event was the inaugural symposium of the recently established Jan and Dan Duncan Neurological Research Institute, directed by Dr. Zoghbi. 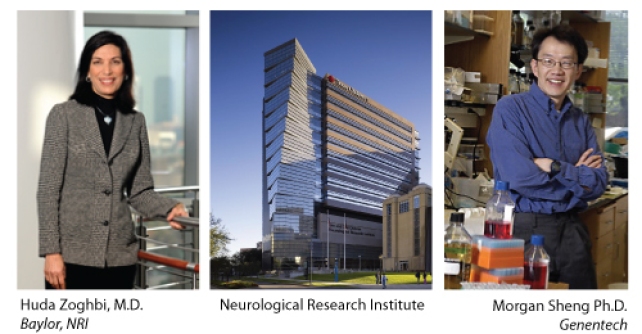 The two-day meeting brought together a heterogeneous group of scientists from academia (senior and junior faculty as well as post-docs and graduate students), industry, NIH and other funding agencies.

The focus was not on  a single disease but rather on a group of disorders (Rett, Angelman, Fragile X, autism, Tuberous Sclerosis) that share

It’s no surprise that some of the talks that generated the most buzz came from labs that are doing very clinically relevant research. These include the labs of Mark Bear at MIT, working on Fragile X, and Ben Philpot at UNC whose lab works on Angelman Syndrome.

Like Rett Syndrome, Fragile X is a single gene disorder, caused by mutations in a gene called Fmr1. When Fmr1 is mutated, protein synthesis fails to shut down, leading to excess. Some years ago Dr. Bear proposed that compounds which can block a certain type of receptor, mGluR5 (which triggers the burst of synaptic protein synthesis) might counteract over-expression of protein and thereby cancel out the damaging effect of Fmr1 deficiency. His theory has proved correct, and clinical trials of mGluR5 antagonists are currently ongoing at multiple pharmaceutical companies. 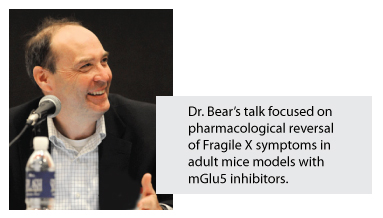 I first met Dr. Bear almost a decade ago, when he was just beginning to formulate what is now commonly known as the mGluR5 theory of Fragile X.  His lab is currently funded by RSRT to explore protein synthesis in the Rett mouse models. Dr. Bear hypothesizes that Rett may be due to under-expression of proteins. If his hypothesis holds up, pharmacological manipulations of mGluR signaling will be pursued.

Ben Philpot’s talk also generated excitement. He discussed a high-throughput screen that has yielded a compound which can activate the silenced Angelman Syndrome gene, UBE3A. Dr. Philpot is currently funded by RSRT to pursue a similar approach for the silent MECP2 gene on the inactive X chromosome.

Mike Greenberg spoke about MECP2 and shared unpublished data that has come about from his collaboration with Adrian Bird via the RSRT funded MECP2 Consortium. (More on that in the months to come.) 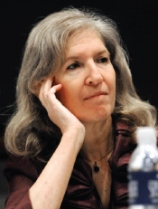 Jackie Crawley of the NIH gave a brilliant talk on how “autistic mice” are being characterized to yield a plethora of new information.  For me the highlight of her talk was hearing recordings of mouse “speech”. She shared a variety recordings and I was taken aback by the complexity and richness of the sounds, which left me yearning for an analysis of Rett mouse vocalizations.

After a lively cocktail hour it was back to work with dinner plates in hand. Drs. Zoghbi and Sheng divided the attendees into three working groups: 1) dysfunction of proteins of the synapse 2) dysfunction of nuclear/cytoplasmic proteins 3) young investigators and junior faculty.  Masquerading as a 30-something I happily joined the third group.  I was struck by the fearlessness and boldness of these young scientists. There were not shy about criticizing the status quo and what could be done differently to enhance the research progress. I came away feeling buoyed and reassured that science is in good hands with this new generation.

The following several hours of discussion, led by Rodney Samaco and Mingshan Xue and facilitated by NIMH Director, Tom Insel, were intellectually stimulating and entertaining. Below is a visual output of our intense discussion.

A few personal reflections on the symposium

Kudos to Drs. Zoghbi and Sheng for a stimulating meeting and thank you both for inviting me.

Science Translational Medicine, which co-organized the meeting, will be publishing a white paper on the proceedings.
RSRT will let you know when the paper is available.